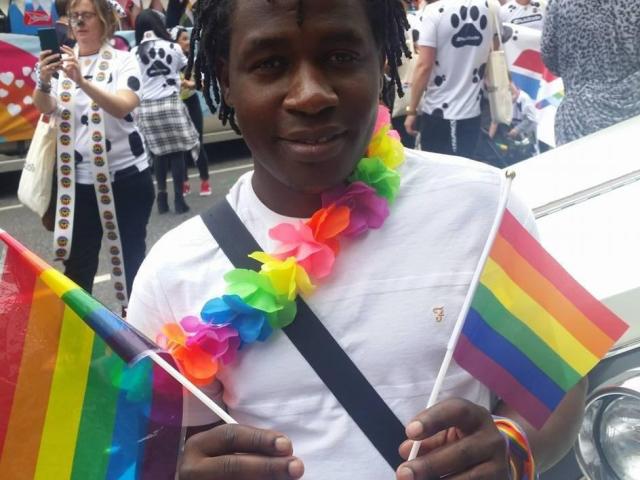 A gay Ugandan-born asylum seeker is facing deportation to his place of birth, where homosexuality is punishable by life imprisonment.

Abbey Kyeyune, who has been living in the Manchester since 2014, told The Independent Home Office officials decided he had failed to sufficiently “prove” his sexuality.

He fled Uganda after his family members discovered that he was having a relationship with another man, and became physically violent towards him.

After leaving Uganda, Mr Kyeyune was told that the Ugandan authorities had issued a warrant for his arrest. He also discovered that his boyfriend had been arrested and detained because of his sexuality.

Mr Kyeyune is being detained at Campsfield House, and is due to be deported on a flight to Uganda on Monday.

He said he could not return to his family, and had no other friends that he could stay with in his native Kampala.

I can’t go back home, because my family will kill me”, Mr Kyeyune said. “I have been very happy in Manchester. I have many friends there, and I have been going to church a lot.”

The Home Office has previously claimed that a lesbian woman could not be gay because she had children, while a bisexual man has said he felt compelled to submit intimate photos of himself to help prove his case.

Updated guidance on LGBT asylum claims was recently published by the Home Office, which forbids “detailed questioning in regard to sexual practices” and requests for “sexually explicit evidence”.

However, Mr Kyeyune’s Home Office interview occurred before this new guidance was in place.

In February, the Home Office was criticised after it suggested deported gay men could live safely in Afghanistan if they “pretended to be straight”.

Philip Jones, who started a Change.org petition to stop Mr Kyeyune’s deportation, and runs a support group for LGBT asylum seekers in Manchester, said Mr Kyeyune had a strong support network in Manchester.

“When he first started coming to the meetings, he was a bit quiet and subdued. I think, because of how he’d been treated at home, he found it difficult to get over the shock of having to flee.“

“But I think he just needed to meet people like himself. And I got the sense that he was really coming to terms with the situation, and enjoying being a gay man amongst other gay men.”

Karen Doyle, a spokesperson for Movement for Justice, an advocacy group for asylum seekers’ rights, said: “LGBT asylum seekers are put in the impossible position of trying to ‘prove’ their sexuality.”

“Ask any UK-born LGBT person to remember the names of all the people they have slept with and dates, describe exactly the process of realising that you are LGBT… it’s an impossible burden of proof for anyone to bear, let alone if you have suffered severe trauma and abuse because of your sexuality.

The truth is that, especially post-Brexit, the drive is to get immigration numbers down. That means deporting as many people as possible as quickly as possible.

Decision makers see their job not as helping someone to tell a difficult story but to get that person to trip up, find the faults, make them anxious and ultimately to say no.”

A Home Office spokesperson said: “The UK has a proud history of granting asylum to those who genuinely need it, and every case is carefully considered on its individual merits.

”Where people establish a genuine need for protection or a well founded fear of persecution refuge will be granted. If someone is found not to need our protection, we expect them to leave the country voluntarily. Where they do not, we will seek to enforce their departure.”