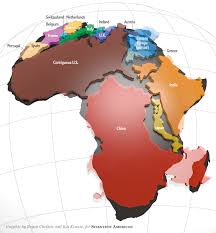 From that one would assume the following pictures are from “Sub-Saharan Africa”: In fact they are all from Algeria in northern Africa.

Dark-skinned people with tightly-coiled hair are native to ALL of Africa and many other places.

Pale or “white” North Africans are remnants of Asiatic steppe hordes who have made various incursions into Africa throughout history (Hyksos, Turkic, Germanic, etc.):

The Germanics (of whom the Vandals were a branch)

The fate of these Asiatic hordes was to: